Marc has been widely acclaimed as the No. 1 Buddy Holly Tribute Artist. As both a solo performer and with his band, The Counterfeit Crickets, he has toured extensively at home and abroad and has taken the lead role of Buddy in a summer season production of The Buddy Holly Story.

As a performer bringing the essence of Buddy Holly to life, Marc is second to none. He is a lifelong fan, which is evident in his attention to detail from the heavy rimmed glasses to the Fender Stratocaster. Performing without his band, Marc provides a unique solo tribute to Buddy, dressed in authentic attire. Marc's appearance is unnervingly like Buddy's own and, to quote the Stage newspaper, "his vocals are uncannily true to the original".

If it's Buddy Holly from 1958 which is required, look no further than Marc Robinson's tribute to the great man himself. Marc can provide a show that runs from 45 minutes up to 2 hours. For a full evening's line up of stars, other tribute artists can also be booked, including Elvis, Roy Orbison, Brenda Lee and The Big Bopper, to name a few.

​Check the Tour Dates page to see where he's playing next or get in touch for booking details such as availability and prices. 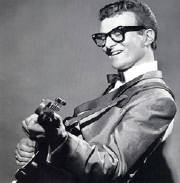 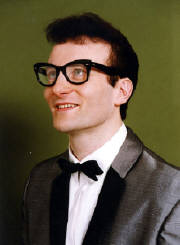 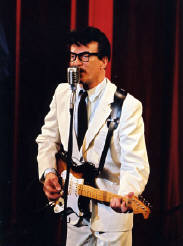 Over the years, Marc has created many lasting memories as Buddy Holly.

When he applied for  Stars in Their Eyes Marc found himself up against 4000 other entrants. He was given a place and was the first Buddy Holly tribute act to appear on the show.

He was privileged to perform on the same bill as Buddy Holly's The Crickets, as well as with other performers such as Marty Wilde, Joe Brown and many more.

He entertained Sir Cliff Richard at the NEC on the occasion of his birthday, as well as playing Glastonbury and the Brit Awards​.

Alongside his music career, Marc has also made numerous TV appearances on both ITV and the BBC, such as The Bill, Eastenders and Silent Witness (to name but a few) and has appeared in TV adverts as diverse as the Fox's biscuit advertisement and the recent American Legends Compilation CD.

Following on from TV, his feature film appearances include Mrs Brown and The Fifth Element.

He has also been involved in numerous theatre shows, including Rockin' On Heavens Door and In Dreams, both of which he is an originator and founder member of.

Marc even found himself working as a DJ for FCUK, an experience he says he found very satisfying.

Nowadays, Marc spends most of his time touring, playing all over Great Britain, Europe and the Middle East at such venues as Cardiff's St David's Hall, Manchester's Opera House and the London Palladium.